From bench to bedside. Part 1: what is happening at the bedside? The personal story of patient Julian

“A moment that I will never forget. I just started my internship at the Princess Máxima Centre for pediatric oncology as part of my master’s degree in biomedical sciences. My supervisor texted me “to come to the laboratory as soon as possible, a tumor sample will come in any moment”. Feeling excited I jumped on my bike. Finally, a tumor sample! Now I can learn how to grow organoids from scratch! Since pediatric cancer is relatively rare, our research group infrequently receives tumor samples. The moment I walked into the Princess Máxima Centre, two parents were crying and comforting each other in front of the main entrance. Suddenly I realized the other side of my excitement and the tumor sample: a patient who just underwent surgery and parents who may just have received bad news after oncologists looked at the tumor. This realization was very impressive to me: even though I am working on pediatric cancer every day, I am not always aware of what is happening at the bedside as I am focusing on research work at the bench side.” – Jessica van der Hoek, researcher at the Princess Máxima Centre for pediatric oncology.

This article is part 1 of the story “from bench to bedside” in which we will highlight the point of view from the bedside. Julian de Kievit, who is diagnosed with brain stem cancer, will tell more about the impact and changes on his life from the moment of the first symptoms to the diagnosis, therapies and nowadays. In part 2 of the article, researchers will give more insight in the perspective from the bench side.

Julian de Kievit (18 years old) was ten years old when he was diagnosed with diffuse intrinsic pontine glioma (DIPG), a type of brain stem cancer. At the moment we cannot cure children with DIPG as surgical resection is not a viable option and chemotherapeutic agents have not been effective in treating this pathology. The rare nature of the tumor type limits further research. Most patients survive less than one year and only 1% of the patients in Europa and the United States survives five years after diagnosis. Nonetheless, seven years after his diagnosis, Julian is still alive: a mystery to him and his oncologist.

It all started in March 2014. Julian did not feel well: a little dizzy and sore throat, probably due to a virus the general practitioner thought. Even though he kept feeling not well in the next weeks, Julian’s family really started worrying when his left leg was sagging while playing outside. A few days later, his left arm was also less functional, and his parents noticed that Julian tilted his head while talking or gaming. The general practitioner forwarded them immediately to a pediatrician for an MRI scan to uncover the origin of his symptoms. “As 10-year-old, I was only nervous for the scan itself, whereas my parents were afraid for the result. I remember that the oncologist wanted to talk with my parents first, before my sister and I were asked to come in. He told me that I had a tumor in my brain, but I did not really understand what he was telling me. Tumor? In my head? Do I really need to sleep in the hospital tonight? The next day, my father explained again what was really going on.” 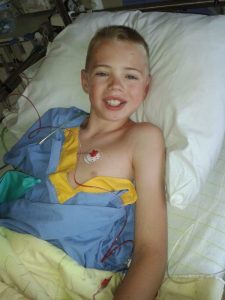 The oncologist directly declared that there was no treatment plan for this tumor type and that Julian had probably only a few months left. Nevertheless, Julian could be included in an academic study for new DIPG therapies, for which he received radiation therapy in combination with chemotherapy. Oncologists could not predict the effect of the treatment on the tumor and on Julian’s condition since only two other DIPG patients had received this therapy. “The study treatment and months afterwards were definitely the most impactful and hard times for me. I experienced various side-effects and was particularly tired for almost two years, which forced me to spend a lot of time in bed instead of going to school or playing outside with friends.” Around four years later, Julian and his oncologist decided to administer chemotherapy again. Researchers found a unique mutation in his tumor DNA which was never seen before. The oncologist expected that this mutation would make his tumor susceptible for the administered high dose chemotherapy. Regrettably, Julian had to decide to stop with this treatment after six weeks. He felt too sick (nausea, throwing up, et cetera) and results were not convincing enough to continue. “It was hard for me to decide to quit with the therapy. Similarly, I found it difficult to make the decision to not continue with my studies. I am not able to attend classes every day due to my low energy levels. I redid some years of elementary school and did my gradation year of high school in two parts. I am proud I received my diplomas but will not start another study as this will cost too much energy.” 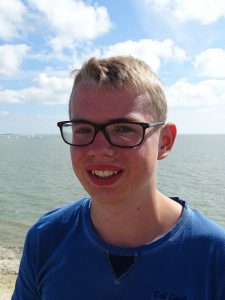 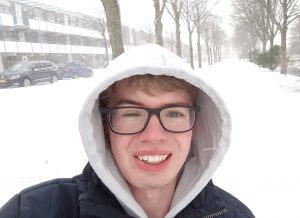 The past years, Julian gave insight in his personal life on his YouTube channel and Instagram page “ill, but also normal” (@ziekmaarookgewoon). “With “ill, but also normal” I want to give people more insight in my life as a cancer patient. Many people have in mind that cancer patients are only lying in a hospital bed and can not do anything. I want to show that patients strive to live as normal as possible and enjoy ordinary things in life. Of course, this is not always possible, but you are not always in sick in the hospital either.” In his videos, he talks more about himself, his cancer type and takes his viewers along with visits to the oncologist, eye doctor and to surgeries and chemotherapies. He answers questions of his followers via Q&A videos and films fun moments in daily life or during special trips. “I am surprised by all the love and help my family and I have received during the past years. Family and friends close to us but also people further away like my elementary school teacher were always willing to help us out, which is very valuable to us.” He also films difficult moments wherein he talks about his mental health, about feelings of loneliness and not belonging, or about missing intimacy with others. On his channels and during the interview, it is noticeable that Julian appears as a very open young adult, who is talking with sobriety and humor.

In May 2014, the oncologist told Julian he had only a few months left. Without treatment options it would be just waiting until his body decided it was time to pass away. More than seven years later, Julian is still alive. “At some moments it can feel like I am waiting until I will pass away. Right after my diagnosis I did not feel that way at all. I was younger, feeling well, playing outside, somehow thinking that the doctor may not be right. Now I am getting older, and my health is deteriorating, it gets harder to look forward. I am in a wheelchair and speaking, hearing and fine motor skills are getting worser. I live day by day. Of course, I think about the future now and then, including my funeral. I think about songs that must be played and about posts on YouTube and Instagram when I have passed away.” Even though Julian is an adult nowadays, he will still be under supervision of the pediatric oncologist since his tumor is a pediatric type. Every three to six months he gets an MRI scan and visits his oncologist, but nothing is really happening at the tumor site at the moment. “The oncologist and I have no clue what the future has in store for me. I think I should be appointed immortal at 10 years hahaha,” Julian is smiling. Recently, he got a tattoo of his motto: whatever happens, always keep smiling.